Who Wants a Nice Bowl of Corn? 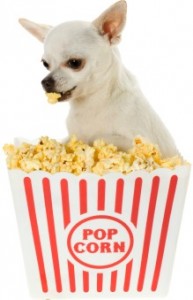 Last week a fantastic four-part documentary, The Weight of the Nation, began showing on HBO. This series brilliantly explains the devastation that highly processed food has had on America’s waistline and overall health.

Of course watching that documentary inevitably brings me back to thinking about our canine and feline companions. They’re really no different than us when it comes to the need for fresh, wholesome food. We’re both mammals – yes our food pyramids are each a bit different – but the same basic principles apply. And yes, we’ve seen  canine and feline health suffer from feeding highly processed foods.

The major difference with pet food however, is that it’s made from the leftovers of human food production. Waste that can’t be turned into anything edible for humans is literally swept up and used to create commercial diets for our companion pets.

I recently saw an analysis of dry pet food that attempted to determine, based on industry averages for costs and profit built in along the manufacturing chain, what do the actual ingredients cost? I decided to use the same math and head out to our local Walmart. There I found a 50# bag of the famous Ol’ Roy for $16.88, or 34 cents per pound.

Now bear with me here, I’m about to do some math. I took that retail price and backed out a 25% profit margin to the retailer (Walmart), a 22% profit margin to the distributor (a Walmart corporation), a 50% profit margin for the contract manufacturer, 4 cents per pound for freight to the distributor, and a measly 50 cents for the printed bag, pallet, tape and handling. The biggest question I had in reading this analysis is, where do they account for the advertising expense? Advertising is a major expense for all commercial pet foods.

Just accounting for profit to each of the three players in the manufacturing chain and a conservative estimate of freight and other expense, you get to an ingredient cost of $3.43 for the entire 50 pound bag, or 7 cents per pound actual ingredient cost. WOW!

What are those ingredients? Number 1 ingredient – ground yellow corn. Corn plays a starring role in The Weight of the Nation. The government subsidizes its production, and it’s cheap. Do dogs have a biological need for corn? Absolutely not.

I’ve created a Dining with Dogs chart. It lists what it costs to feed some of the foods we sell at Noah’s, compared to some of the low cost alternatives. Spoiler alert! The old adage “you get what you pay for” generally applies here.

But, you say, “I know dogs that have lived 10 years eating Ol’ Roy”. Yes, there are dogs alive after years of eating Beneful or Ol Roy, just as people around the world survive on sub-optimal nutrition. They’re alive, but they’re not vibrantly healthy. When it comes to our companion canines, they’re overweight, but undernourished. They’re arthritic and lethargic. They develop diabetes, allergies, and often cancer— hey that sounds a bit like what happens to us too.

My advice to you is to learn to read pet food labels. For a basic primer, click here.

There’s one caveat with pet food, that you tend not to get with treats. That is, it’s really difficult to tell where pet foods are manufactured. Most treats, if you really read the fine print, tell you what country they’re manufactured in. However, close to 90% of commercial pet food is manufactured by a relatively small group of contract manufacturers.

It goes like this- the pet food company gives the “recipe” to the contract manufacturer and trusts the rest of the process to them. Two problems: first, as the most recent recalls illustrate, contract manufacturers don’t always adhere to best practices. Secondly, it’s impossible to tell whether the ingredients the contractor uses for any particular food are sourced in the US or out of China.

That’s why we’re so enthusiastic about the Orijen line that we carry at Noah’s. This relatively small company owns it’s own manufacturing facilities and controls the process from procuring ingredients to manufacturing from beginning to end.