Failure of Passive Transfer in Horses 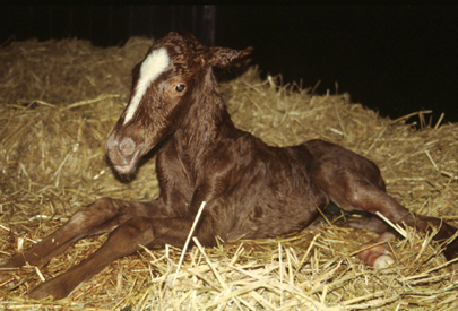 In pregnant mares, unlike most other animals, antibodies do not cross the placenta into the foal's blood stream before birth.  Therefore, when a foal is born it has no natural defence mechanisms against infection because it has no antibodies, that are the blood's special immune proteins, with which to fight infection.  Normally, the foal receives these antibodies in the colostrum (first milk) that it drinks from its mother.  Failure to receive sufficient antibodies result in a condition known as 'failure of passive transfer of immunity' (FPT) and this significantly increases the risk of the foal developing life-threatening infections such as septicemia (blood infection) or septic arthritis (joint ill).  Foals start making their own antibodies after three to six weeks of age but are clearly at risk prior to this.

How is colostrum formed?

Colostrum is the thick, honey-like fluid that is present in the mare's udder at the time of foaling.  It is more concentrated than normal mare's milk and usually contains very high levels of antibodies.  The antibodies come from the mare's blood and represent her own body's response to the disease-producing micro-organisms, with which she has come into contact, and in response to the vaccines she has received during the weeks before the foal is born.  Therefore these antibodies are relatively specific for the mare's individual environment. 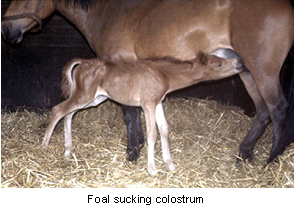 How does FPT occur?

There are several reasons why a foal may receive inadequate levels of antibody after birth.  If a mare 'runs milk' prior to foaling, this will result in the loss of significant quantities of colostrum so that there is too little left for the foal to drink to guarantee adequate antibody intake.  Some mares, either habitually or as an isolated occurrence, do not produce colostrum of sufficient quality, i.e., their colostrum has a low concentration of antibodies.  In other instances, the foal may be slow to suck either due to illness or weakness.  There is a finite 'window' of time up to about twelve to eighteen hours after birth during which these antibodies can be absorbed into the foal's blood stream without being digested in the intestine.  Once this time is up it is no longer possible for ingested colostrum to provide the foal with useful antibody levels in its blood stream.  Conditions that result in stress to the foal, for example a traumatic birth, death of or rejection by the mare can actually shorten the length of time that the foal's intestines can absorb antibodies.  This also reduces the amount of antibody that the foal ends up with in its blood circulation.

How can I tell if my foal is suffering from FPT?

If the mare has run milk or for some reason the foal has not sucked normally, there is a very good chance that the foal will be suffering from FPT.  Even if everything appeared normal, it is possible that FPT has occurred.  The only way to be sure is for your veterinarian to take a blood sample from the foal to measure the blood level of antibodies (immunoglobulins, abbreviated as IgG).  This test is normally performed on the second day of the foal's life to give IgG levels time to 'plateau', but if you believe that your foal is at particular risk of FPT, a blood test can be performed any time after twelve hours of age and will give a helpful indication of the foal's immune status. 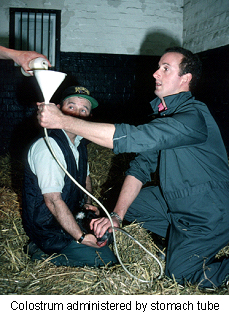 How can I prevent FPT?

In order to help mares concentrate high levels of antibodies in their colostrum, it is a sensible routine to have them vaccinated against tetanus and equine influenza, a month before their due date.  This will stimulate specific immunity against these diseases, that is helpful to the foal, but may also help the mare produce antibodies generally and less specifically.

If a mare starts 'running milk' close to foaling time, the colostrum can be stripped from her and stored in a domestic freezer until she does foal.  Alternatively, donor colostrum, i.e., colostrum from another mare that has been stored frozen, can be administered to a foal within the first twelve hours of life. Any colostrum that has been frozen should be thawed gradually in warm to hot water.  COLOSTRUM SHOULD NEVER BE MICROWAVED as this will damage the antibody proteins and reduce their efficacy.  Colostrum should not be stored for more than 12 hours in a refrigerator as the large proteins will decay.  Alternatives to giving donor colostrum consist of the administration of commercially produced equine supplements, that can be provided by your veterinarian but that still must be given within twelve hours of birth to be effective. 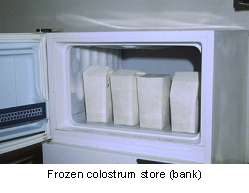 If your foal is slow to stand or suck, or has limb problems that delay its capabilities, it should be helped to stand and suck or bottle fed with colostrum stripped from the dam.

In foals in which FPT has been diagnosed, blood levels of antibody can be boosted by the administration of plasma either from the foal's own dam, a donor horse, or in the form of commercially produced plasma.  The latter has the advantage that it only has to be thawed prior to administration but the disadvantage that it is not 'location specific' for the mare and foal.  Performing a plasma donation from the dam or another donor involves collecting a large volume of blood, separating the plasma from the cell fraction and administering the resultant plasma to the foal.  This tends to be time consuming and carries with it the risk that the plasma used for the transfusion also has low levels of antibody so that more than one transfusion may be required to bring the foal's blood antibody levels up to a satisfactory level.  Commercial frozen plasma is therefore usually the most practical source.

How can I get early warning that FPT may occur?

Many stud grooms now use a colostrometer (a hand-held refractometer) calibrated to measure IgG levels in colostrum.  They express a small quantity of colostrum from the mare's udder, as soon as she gives birth to her foal, and run the test (that takes just a minute or two).  If the colostrum is of poor quality (low IgG level) then the foal can be supplemented by stomach tube or bottle with donor colostrum even before it has first sucked the mare.  Your veterinarian can help you obtain and set-up this test.

What symptoms are seen in a foal with FPT?

Initially, there are no recognizable abnormalities.  The foal may appear to stand and suck normally and may appear very normal for days or even some weeks.  Some foals will never show any abnormalities.  Others, however, will succumb to infections involving the navel, one or more joints, the lungs or even septicemia (generalized blood infection).  The symptoms will vary but the foal normally has a fever, i.e., a high temperature, will become depressed, 'off suck' and, if the joints are involved, acutely (suddenly) lame.  In any of these instances your foal should be seen by a veterinarian as an emergency.

In conclusion, the neonatal period, i.e., the first few days of life, is a 'high risk' and very important time for the immediate and longer term health and welfare of the foal.  It is therefore very good 'insurance' to help maximize the quantity and quality of the mare's colostrum, to make sure that the foal drinks as much as it can within the first 12 hours of life and to confirm that satisfactory transfer of immunity has occurred by asking your veterinarian to perform an IgG blood test.